Seeing as I recently celebrated my 100th day in Korea, I decided to commemorate this milestone with a post of no less than 100 photographs. Ambitious? You bet!

These photos will broadly reflect my experiences so far. A little bit of this, and a little bit of that. I’ve organised them into broad categories, though I don’t have the time nor the motivation to sort them chronologically, or any more specifically, really.

In the interest of sensory overload (and my attention span), I’ve broken up this project into smaller parts and will work on each post as time allows.

One of the things that’s helped ease me into this whole Asian experience, is the availability of Western products, and most specifically things from (or inspired by, or reminiscent of) South Africa. 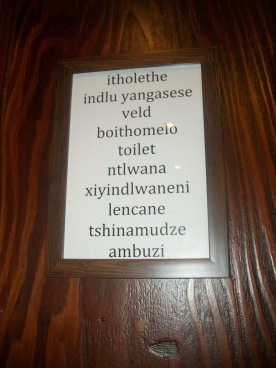 Some Saffa humour at Braai Republic, the South African restaurant in Itaewon.

SA is representing in Itaewon! Yeah OK, so does just about every other country, but it’s pretty cool to recognise your own flag.

Milo! This baby had a prime spot in my kitchen for about 2 months. I recently broke the seal. Yum yum yum!

My guilty pleasure. Reminds me of “fluffy koffie”, a special-occasion indulgence in our household. 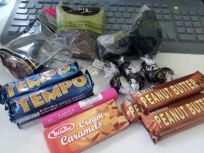 And the pièce de résistance – the choccies my mom sent me for my birthday. They have a very sacred spot in my fridge. At this stage, they’re of more value in my line of sight than in my stomach.

Braai food from the annual South African get-together we had in June. Complete with noodle salad. 🙂

This irks me so much, but I suppose “sawubona” sounds more African than “hi”.

I’ve already dedicated an entire post to the school I work at. And that was only the first week. Since then, I’ve fallen in love with my job. And I adore the kids.  Even though I was born to teach high school (or was I???), I’m really enjoying this experience and I look forward to each class. 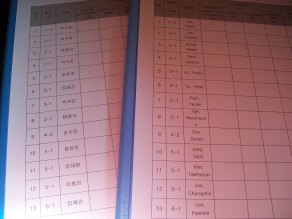 I was a judge at the English Speech Competition, complete with customised score chart.

One of the contestants at said speech competition.

The local education department sponsored the foreign teachers on a cultural outing. I could do this again!

One of the activities on our outing – painting porcelain mugs. Concentrating hard, we are.

That’s my name in Hangul. Well, one of the variations at least – the one I prefer.

Heyri Art Village – another leg of the outing.

At one stage, I spent a few days cataloguing the English reading books. The best part? No shoes in the reading corner!

I just love this little kid! He’s in one of my kindergarten classes. He’s so enthusiastic and always has a smile on his face. Except when I’m trying to photograph said smile…

Hamburger day! I enjoyed the freedom of planning summer camp.The kids loved the clip from Pink Panther where Inspector Clouseau had to say “I’d like to buy a hamburger”. 🙂

Another summer camp favourite – Uno! Change up the rules a bit, like that they have to draw 2 cards if they speak Korean, and you have yourself a perfectly legitimate summer camp activity!

I didn’t tell anyone at school that it was my birthday. When one person found out, the news spread like wildfire and within an hour the teachers had organised a surprise party for me.

This is what the cake looked like that they got me – each slice is a different flavour of Baskin Robbins ice-cream.

Random groups of kids showed up in my classroom to come and sing happy birthday. In English! 😀

In a small countryside town like mine, there isn’t all that much to do, so I’ve spent a lot of time wandering around, exploring new places and discovering interesting things – both in Munsan, and further away. So far, my adventures haven’t taken me past Seoul, but that’ll change very soon. 🙂 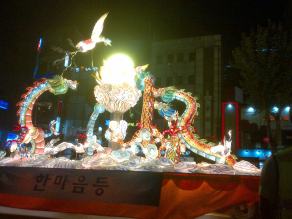 On my first weekend here, I met a friend in Seoul and saw the annual Lantern Festival in celebration of Buddha’s birthday. It was spectacular!

More from the Lantern Festival.

Also in Seoul – Little Russia. It’s quite something to see the Cyrillic scattered in between the Hangul.

The menu at one of the Russian restaurants. Thank goodness there was an English version!

I’m always amused by how people stick to the right on escalators, so the hurried ones can pass.

Also in Seoul – Hello Kitty Cafe. A coffee shop dedicated to the HK, with everything from coffee to waffles being Kitty-adorned. This display reflect’s Kitty’s more adventurous side.

Most people are somewhere on the spectrum of stationery obsession. I love this store!

Only in Korea… Cars had to slow down in the narrow street in order to avoid this bicycle. Its owner went into a nearby shop, leaving the bicycle and bag unattended. I dare you to do that in SA.

Homeplus-plus! This chain of all-in-one stores is a life-saver. It’s a spin-off of Tesco, which means there are many Western products (complete with English labels!) available. Grocery shopping would be an absolute bust otherwise.

I took this one rainy morning during our monsoon season. Wish I had this level of dedication!

Another something you’d never see back home – late one evening, the kids were playing in the fountain at the local park. The clean, safe, uninhabited local park. 🙂

How many tree delivery trucks do you see? Five? Well, there were 15 lined all the way up the road that morning. Very random.

Penis soap. For a country so aware of hygiene, I can’t imagine why liquid soap hasn’t caught on. Instead, they attach regular bars onto these holders. And after multiple uses, well…

Why cross two roads when you can hop across diagonally? These intersections were intimidating at first, now they’re so convenient.